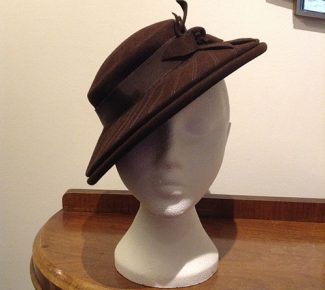 This beautiful Derry & Toms hat has lovely stitching to the brim which is only just visible in the photograph.  The brim is stiff but the hat has a soft felt crown with ribbed band and felt flower detail. Inside, there is an elasticated loop covered on one side in brown velvet.  I imagine this would loop over a hair-bun, or be looped over the back of the head and secured with pins, so that the hat could sit securely on the head. Inside, the hat is labelled,

In 1853, Joseph Toms opened his small draper’s shop on Kensington High Street in London. In 1862, he went into partnershop with his brother-in-law, Charles Derry, and Derry & Toms was born. It built up a reputation for quality and luxury among the wealthy residents of Kensington.

In 1920, the store was bought by John Barker & Co who already had premises close by.  In 1930 a new, seven-storey building, including a popular roof garden, was commissioned and, eventually, opened in 1933. Its restaurant became a popular venue for dinner and dances.

Derry & Toms went on to be bought by different companies over the years, including House of Fraser and Biba, and eventually closed in the 1970s.  However, the building, itself, remains a Grade 2 listed building so we can still enjoy its architecture today.

Condition: Lovely! There is only a little stretch remaining in the elasticated loop but it can still be used to secure this original vintage beauty. Very good condition for a hat that is 80 or 90 years old!

How lovely that this hat was part of the history of such a prestigious department store, especially, during its most popular and glamorous time.  A genuine piece of British fashion history.

AVAILABLE IN OUR WINCHESTER SHOP: SOLD 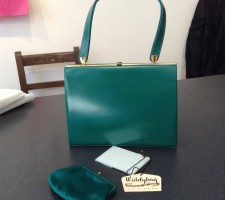 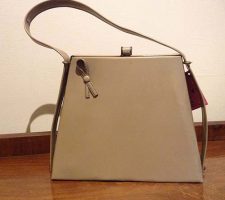