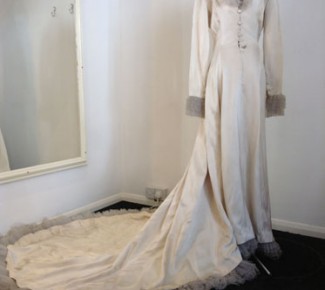 Glenda Jackson Film Costume.? Glenda Jackson wore this gorgeous gown in ‘The Incredible Sarah‘, a film about French actress Sarah Bernhardt. It was directed by Richard Fleischer in 1976. The film was nominated for an American Academy Award in the category of Best Costume Design in the 1977 Oscars. This stunning film costume was designed by Anthony Mendleson, who also designed the film costume for “Kind Hearts and Coronets” and “Oh! What a Lovely War”, among others.

The film costume bears the name of the famous film and theatre costumiers, Bermans and Nathans. There is also a label which has Glenda Jackson’s name on it as well as the name of her character in the film. This label also gives the number of the costume. There would have been more than one costume of this design as film-making can take its toil on beautiful fabrics and trimmings. There is certainly some evidence of wear on this film costume but, given its age and pedigree, it is in remarkably good condition!

I would, usually, add a Condition Report but if you are interested in this lovely piece, please email me and I can provide you with a lot more photographs. As you can see from the picture, this film costume is truly beautiful and has been modelled on a couple of occasions – to gasps from the audience. The circular train is wonderful. I’m not sure if the material is satin or not, but it looks beautiful and the buttons are covered in the same material. It would make a fabulous wedding dress!

I have not measured this gorgeous film costume but it has been modelled by two ladies who were both a modern UK Size 8 and they, each, found it a little tight on the waist! That Glenda sure was a slim gal!

This beautiful film costume, worn by Miss Jackson, featured on some of the posters for the film. Glenda Jackson was also nominated for a Golden Globe in the ‘Best Motion Picture Actress – Drama’ category.

Ever fancied getting married in an Oscar-nominated film costume? This is your chance! Or – for that special occasion when you simply must look your most wonderful! Also ideal opportunity for any fan of British Cinema to own a authentic piece of Film History! 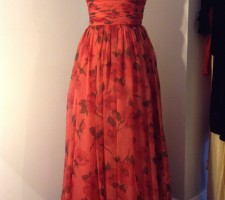 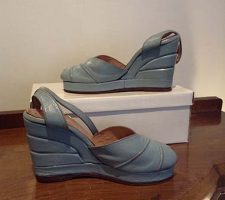 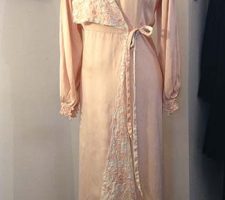